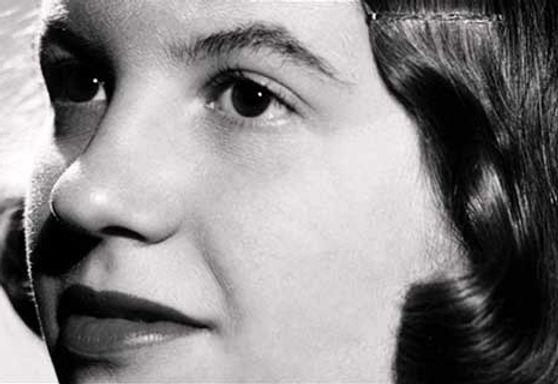 Curator Dorothy Moss will lead a tour of One Life: Sylvia Plath in celebration of Plath’s birthday.

In honor of National Poetry Month, Associate Curator of Painting and Sculpture Dorothy Moss writes on captivating poet and novelist Sylvia Plath. If this piques your interest, look out for the Portrait Gallery’s future exhibition “One Life: Sylvia Plath,” opening in the summer of 201

What I fear most, I think, is the death of the imagination. When the sky outside is merely pink, and the rooftops merely black: that photographic mind which paradoxically tells the truth, but the worthless truth, about the world. It is that synthesizing spirit, that “shaping” force, which prolifically sprouts and makes up its own worlds with more inventiveness than God which I desire.

American poet and novelist Sylvia Plath (1932–1963) retains a fierce hold on the global popular imagination. In the years since Plath’s death, interest in her has been extraordinary and continues to evolve. Her poems and stories have been translated into thirty languages. More than fifty full- length critical monographs have been written, and between 2013 and 2014 five new biographies were published.

Approximately 550 journal articles have been written about Plath, and more than 150 books contain essays about her. Fictionalized versions of Plath’s life have been made into films, plays, novels, and an opera. Contemporary musicians draw on her words as source material, and visual artists use her life and poetry as fodder for conceptual work.Her name is tossed around in pop-culture circles to the point that contemporary celebrities like Lena Dunham tweet about her in relation to Taylor Swift.

In fact, Plath can be found in virtually every social media outlet from Tumblr to Pinterest to fashion blogs. A look at Plath’s online presence reveals that her popularity crosses age, race, class, and gender lines. Writing for the New York Times on May 31, 2013, Liesl Shillinger claimed, “In the United States, she [Plath] is undergoing a kind of resurrection and image overhaul, spearheaded by young women and by poets, male and female.” I can’t help but wonder whether it is Plath who captivates or the idea of Plath?

In the summer of 2017 the National Portrait Gallery will present Plath’s biography visually with a “One Life” exhibition, the first exploration of her life in the context of an art and history museum. Visitors will be able to consider the ways in which Plath shaped her public and private identity as she came of age as a writer in the 1950s.

Although Plath’s identity as a writer is well known, less attention has been paid to how she crafted her identity visually through her own artwork and through photographs. The power of her visual imagination surfaces forcefully when her artwork is viewed alongside her manuscripts and family photographs. Through a carefully selected array of images and objects from the Plath archives at Smith College and the University of Indiana’s Lilly Library—two collections that have never been brought together before in a museum exhibition—visitors will glimpse the societal pressures young women navigated in the 1950s.

In letters to her mother and others, Plath draws on the language of portraiture, discussing her “masklike face” and describing herself as dualistic, making distinctions between her “brown-haired” and “platinum personalities.” Her Smith College thesis, “The Magic Mirror: A Study of the Double in Two of Dostoevsky’s Novels,” suggests that she took an academic approach to studying her own dualities. She writes in the introduction, “This simultaneous attraction and repulsion arises from the inherently ambivalent nature of the Double, which may embody not only good, creative characteristics but also evil, destructive ones.”

That these two parts of her coexist seamlessly in both word and image speaks to her “synthesizing spirit” and draws us into her vibrant and urgent realm, where we join her in “moving, working, making dreams to run toward” (February 25, 1956, The Unabridged Journals of Sylvia Plath).

Please note that there is not an archive of this event we can point towards. The link provided is to the general Smithsonian National Portrait Gallery website.